“Only human beings can bring about change”

by admin
in World
0

The words that give this article its title are part of the central ideas of Athos Salome’s message. If you don’t already know who he is, we’ll tell you.

Athos Salomé has been recognized by the international press as one of today’s leading psychic’s. Some websites and news reports have compared him to Baba Vanga and even the almost legendary Nostradamus.

His meteoric appearance in the media was mainly from 2019. It turned out that the pandemic, caused by the COVID-19 virus, and the whole situation that followed would confirm some of his prophecies, made and recorded in 2012, according to the seer himself.

Another of his predictive acts involved the recent war between Russia and Ukraine. Through symbolic language, which to some extent resembles the way of Nostradamus, Athos Salome is said to have predicted and anticipated the date when Ukraine began to be invaded by Russia, registered by another portal on March 30, 2021.

In the translation of his prediction, Athos says: “The King and Angel of Death are coming from the West of the underworld, asking for attention to be turned to the Western Hemisphere, especially to the continents of Europe, Africa, and Antarctica, of course, it’s not possible to forget about America. Huge conspiracies, misery, crimes, innocent deaths, innocent people being condemned and judged, paying a high price due to the imprudence and malice of others, what we are already experiencing will be worse.” 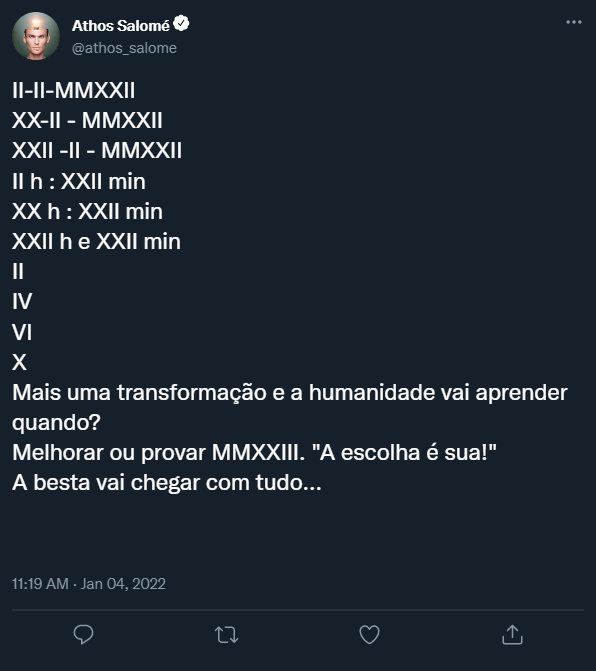 Behold, all this in a single post, in which he tells about the new predictions: 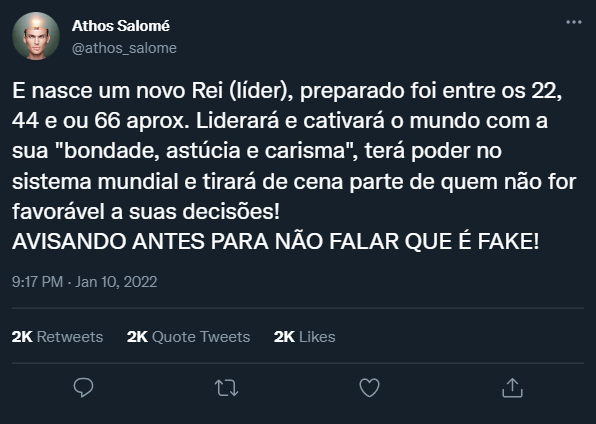 “And a new King (leader) was born, has been prepared between 22, 44 and 66 approx. He will lead and captivate the world with his “kindness, cunning and charisma”, he will have power in the world system and he will remove from the scene part of those who are not in favor of his decisions!”

Apparently, he got it right, for exactly 44 days after the post, Russia began its invasion of its neighboring country.

However, although surprising, it seems that for Athos the most important message is that human beings need to change. Besides repeating in almost all of his messages that people need to seek more love, forgiveness, and also that they should turn their thoughts to God, he also carries a number of other guidelines, warnings, and even some outrage.

Among his most criticized views is his position on plastic surgery. Athos defends the thesis that every human being has the freedom to do with their body what they wish.

Still according to him, one of his dreams, when he was a child, was to be a plastic surgeon and help people, but, however, his vocation was another one, which led him to help others through mediumistic assistance.

Another relevant point on the subject are his statements about the prejudice that science would have against mediumship and clairvoyance. According to Athos Salome, humanity could benefit greatly from the junction of these two worldviews.

For him, clairvoyance could help science to anticipate various events, thus providing means and time for solutions and preventive measures to be taken. Indeed, such a glimpse, at least in theory, could save millions or even billions of lives every year.

Athos Salomé shows that it is possible to be Paranormal and walk together with Psychology, Psychiatry, Medicine and Science, having strong allies such a psychiatrist Dr. Ray Padridin, the specialist and Behavioral Expert Thiago Luigi,
the psychologist Salomón Barboza and the doctor Dr. Edmundo Ahouagi.
Psychology is concerned with the usual psychic phenomena of human behavior, Parapsychology studies phenomena that are on the fringes of what is usual, often called occult. Divination makes vague and general statements and does not clarify the facts.

It is also worth mentioning that this seems to be another point of coincidence between Athos Salome and Nostradamus, since the latter lived in a time when science and mysticism went hand in hand, so that to some extent it was impossible to dissociate faith and knowledge.

But not everything is flowers, sometimes in the press and on social networks, Athos Salomé has been attacked, even being called a model, an advertiser, and discredited in other ways. To which he defends himself, saying that he doesn’t need exposure or media, since he already has a solid career as a parapsychologist trained at Emill Brunner University and with more than 17 years of experience in mediumistic assistance and consulting.

In addition, the paranormal has undergone an evaluation by Dr. Thiago Luigi, an expert and behavioral specialist. The procedure would confirm Athos’ position of honesty and sincerity regarding his psychic visions and paranormal abilities.

Out of all this, the only really sad thing is to see that more people are concerned with belittling his work than observing the positive messages brought by Athos. It seems that many fail to see that a prophecy is just a prophecy, it is something that may or may not come true, but a message of light, hope and love inevitably changes something in the world.

As it can be seen, Athos had a different life than what is shown today in the major international news portals and that’s aroused curiosity in experts of paranormality around the world. Against all odds – and in a very discreet way, the Paranormal already served people, those whose Athos considers as patients.He has attended models, sub-celebrities, celebrities, authorities and even politicians. He did and still does volunteer services helping NGOs of animals rescued by badly treated and contributes helping needy families with donations, listening and helping to specific treatments with professionals from other niches. The paranormality is a subject that causes buzz, especially when science tries to demystify it and today it can be considered a profession so far.

The radical change of the Paranormal, from Brazilian model scouter to Baba Vanga of the New Generation.

An Introductory Enquiry into Rotating and Charged Black Holes

Disrupting the online art market: interview with Maryna Rybakova, the founder of Artsted.com

Yes, And…No. Why Improv Must Improve.

Facebook has been Renamed as Meta, Mark Zuckerberg’s Announced

Keep Calm And Curry On: Must-Try Japanese Restaurants in Bali

Rowdy Bars Snacks Are Taking Over

No Result
View All Result